Come check out our review of the Great White Shark strain! A potent day time sativa that has a tendency to creep up on you, (much like its fishy namesake) leaving in its wake a cerebral high followed by a more pervasive body high but without the usual paranoia that would accompany a strong sativa like this one. Though best used to promote energy and stress relief, it’s not a strain you’d like to use before bedtime! Also, it can leave your eyes pretty obviously bloodshot so you’ll want to have your eye drops and/or sunglasses at the ready!

Great White Shark is a potent strain that is known for its ability to provide a strong indica body buzz very quickly. For this reason it’s often recommended medically to treat chronic pain ailments. The sativa qualities of this strain keep this heavy hitter from being a complete knockout, but it isn’t recommended for days when a lot of work needs to get done. Great White Shark plants grow best indoors and will flower between 8 and 10 weeks. It has a strong fruity aroma that also alludes to its Super Skunk lineage. The buds themselves should be examples of the “white” part of its moniker, with a blanket of crystals and burnt orange to brown hairs. Also known as Peacemaker or just White Shark, this strain won the 1997 High Times Cannabis Cup. 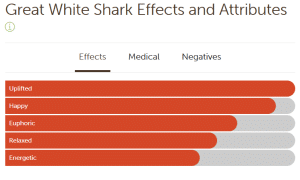 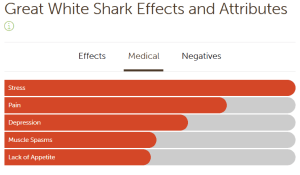 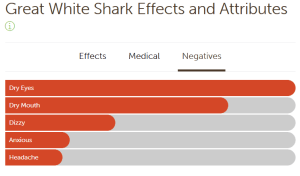 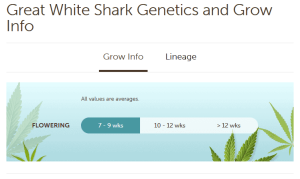 The buds themselves commonly have an overwhelmingly sweet smell to them, similar to berries that had been dipped in some type of sugar. The smoke itself is said to be very smooth, but contains natural earthy tones mixed along with somewhat citrusy and skunky flavors, adding to its already pungent aroma. Test out the waters with Great White Shark!

“one of my new found favs…rolled up a joint and stubbed it out half way..let the high creep in..I made the mistake and stopped the channel surfing on the golf channel…45 mins later I woke up in a puddle of drool..knocked out haha…great bud, Def goes with the mood..if it’s a rainy day, your gonna know…but to could go to a park just the same…”