The ever evolving cannabis industry now has a new but expected dynamic inclusion with PYXUS International Inc. (NYSE: AOI) formerly known as Alliance One International. The billion dollar plus international tobacco giant sent out a press release yesterday outlining the purchase of controlling shares of two medical cannabis companies in Canada, Goldleaf Pharm and Canada’s Island Garden. Neither Canadian company is publicly traded on the Toronto Stock Exchange, however Alliance One International will be yet another U.S. publicly traded company investors can look to if interested in buying into the cannabis industry.

The company, which has a market capitalization of approximately $117 million and has generated $1.2 billion year-to-date sales through the first three quarters of its 2018 fiscal year, unveiled a new strategy, “One Tomorrow” and provided details about the acquisitions, including a 75% equity  stake in Canada’s Island Garden and a 80% stake in GoldLeaf Pharm. The acquisitions were made through its wholly owned indirect subsidiary, Canadian Cultivated Products, Ltd. Neither the filings nor the press release detailed the transaction costs, and the company didn’t respond to an inquiry during the conference call but said that it would do so at a meeting in the summer.  It expects to fund the expansions in Canada through cash flow generated from the operations.

This is the second time that a U.S. company has elected to buy into Canadian cannabis companies. Last year, Constellation Brands (NYSE: STZ) purchased a little less than 10% of Canopy Growth Corporation (TSX: WEED) (OTC: TWMJF). It has long been speculated that both alcohol and tobacco would try and get into the legal marijuana industry. Federal prohibition is likely the only thing that has been holding them back before these acquisitions. In the meantime, alcohol and tobacco are concerned that as legalization of cannabis expands, demand for their products will wane.

Alliance One is a well run efficient company and being a part of the tobacco industry means they are familiar with adversity. Despite the popularity of cigarettes having fallen off a cliff, the company perseveres with 2017 third quarter results showing revenue of $447.34 million and  a net income of $1.02 million, which represents a 14.87% increase year-over-year. Acquisitions such as these also shows the company’s willingness to adapt to the market and work to make shareholders happy. 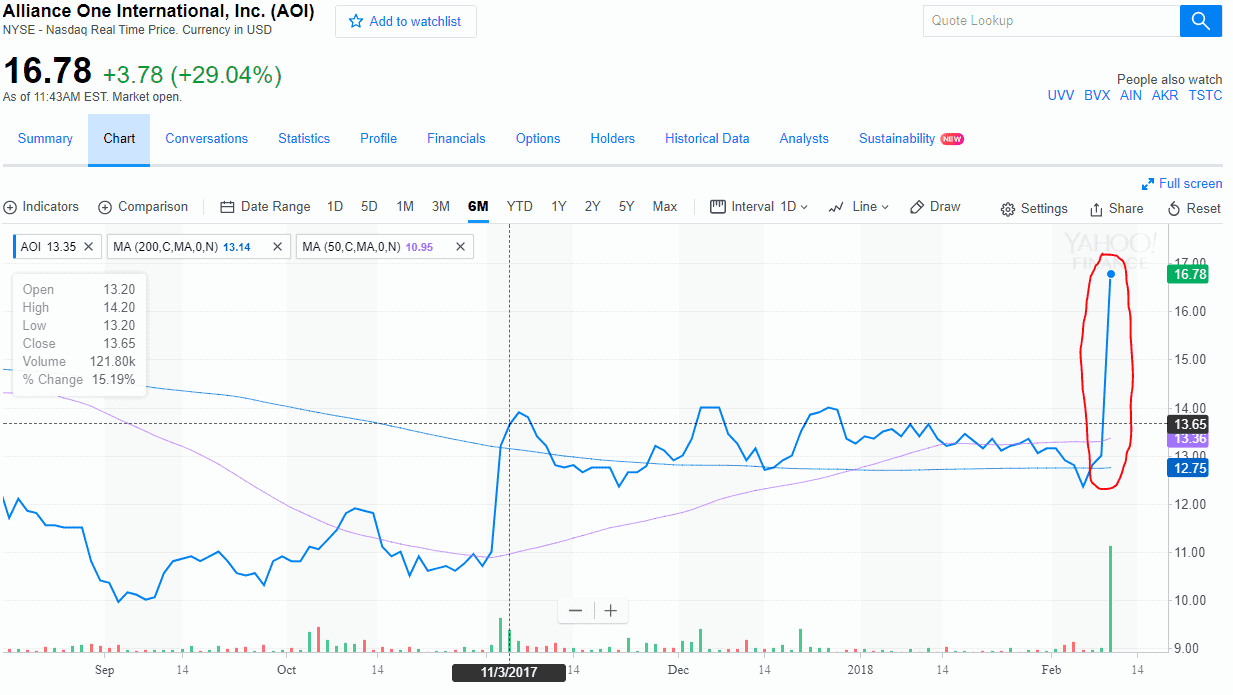 The acquisition of both Canadian cannabis companies spurred some real demand as AOI’s stock jumped $3.78 yesterday representing a 29.04% gain. Today the stock has settled a little after the initial enthusiasm but retained a lot of the gain. In light of the the overall market’s drop yesterday, this gain shows some real strength. Earnings are set to be reported on Monday. Investors should always be careful with fundamental data such as acquisitions because the market will often react quickly and price-in the anticipated movement. In other words, investors may be too late to get in on the initial enthusiasm and will want to evaluate the merits of the acquisitions and what they can do to help Alliance International moving forward for a longer term play.