Marijuana stocks from a U.S. perspective are really confusing. The desire to invest in cannabis companies is strong, however there is a lot to consider when deciding which cannabis equity to purchase, whether it be an individual company or an ETF. There are roughly 352 different cannabis related equities within the sector that have enough liquidity to make them worth considering. However, even the largest of companies like Aurora Cannabis Inc. (ACB:CA) and Canopy Growth Corporation (WEED:CA) can see as much as a $.50 to $1.00 spread difference between their bid/ask. It is important to remember that the cannabis sector of the market is still young, and like so many new introductions it is going through a trial and error process to find the stability it needs to draw more open interest.

Macroeconomic effects on the cannabis market are important to consider as well with the overall mainstream market testing highs never seen before. There are plenty of exogenous events that could potentially tip the market over and bring the cannabis sector with it. The recent dip in the market that started around January 23rd and hit a bottom (for now) on February 2nd, took the Horizons Marijuana Life Sciences Index ETF with it to the tune of 31.09%. The S&P 500 was off 7.79%, with support being found on February 5th. While this one example is a small sample size, it may be indicative of a tight correlation between the cannabis sector and the rest of the market. 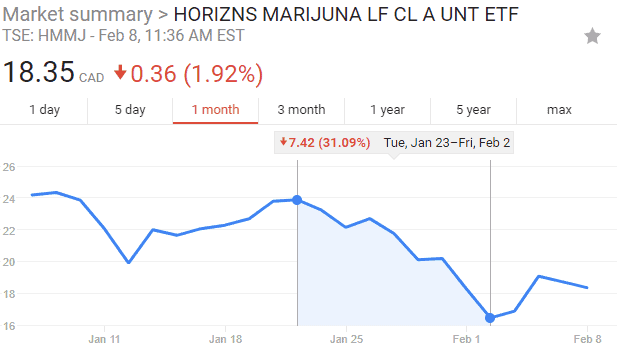 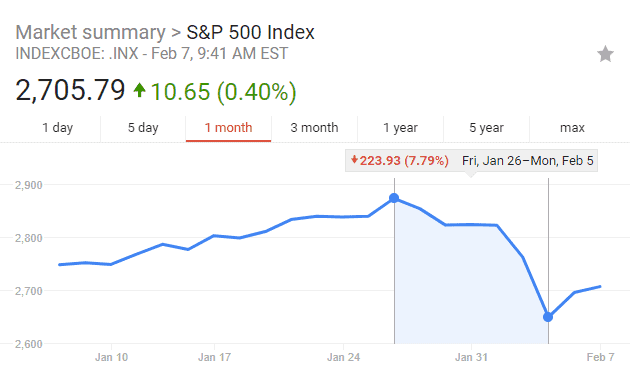 Investors must also consider Canada when looking at cannabis stocks since the biggest and best are traded on the Toronto Stock Exchange (TSX). The U.S. economy is complicated enough, trying to understand what Canada is planning at the same time is a challenge to say the least. It may not be a surprise to many people that Canada manages its economy differently than the United States. Case in point is the recent tax reform in the United States, which its anticipation is the underlying reason for much of the rally in the S&P 500 and Dow Jones Industrial Average ever since President Trump took office. While the U.S. makes plans to cut corporate taxes, Canada’s three largest provinces have raised the minimum wage. The United States Dollar (USD) has declined, making it more competitive for exports, and the Canadian Dollar (CAD) has been on the rise.

While Canada’s TSX Composite Index (Canada’s equivalent of the S&P 500) has not benefited from the bull market as much as major U.S. stocks have, it did not sell off as hard on the recent market downturn either. Again, as of the close of business on Monday, February 5th, The S&P 500 was down 7.79% and the DJI was down 8.53%, both from the January 26th high. The TSX Composite hit its all time high earlier on January 4th and was down 6.57% on February 5th. This clearly demonstrates how confusing analyzing cannabis stocks can be considering the two different economic policies impact each market place uniquely. 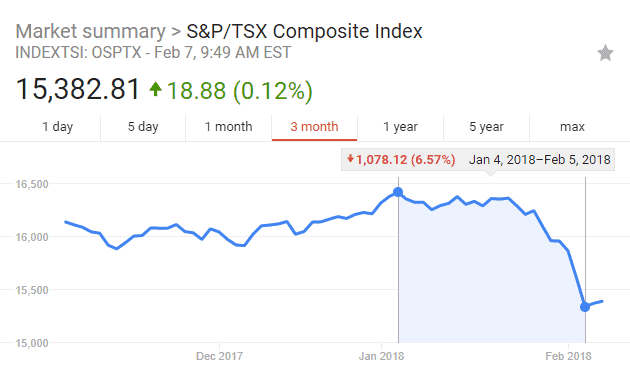 While none of these downturns yet represent a full correction in the market, which would be 10%, nor are we anywhere close to a recession, dips like these are worrisome. Investors cannot be ultra focused on an individual equity for too long, they must look at the bigger picture due to tight correlations during market downturns. With cannabis companies predominantly represented by Canada, thoroughly analyzing the equity becomes even more confusing when in some ways the U.S. has an opposite reaction to its northern neighbor. In other words, investors cannot anticipate that the TSX Composite Index will stay correlated to the S&P 500 and Canada based cannabis stocks may react more to their economy than the United States economy.

In order to begin understanding all of the factors affecting cannabis stock prices, let’s start by taking a look at the biggest players out there, as well as some of the Exchange Traded Funds (ETFs) investors can choose from. We will see correlations, review some major technical indicators and touch upon options for applicable equities. The ultimate purpose is to better understand the niche that cannabis equities fit in so that investors can decide whether or not marijuana can help further diversify their portfolio. 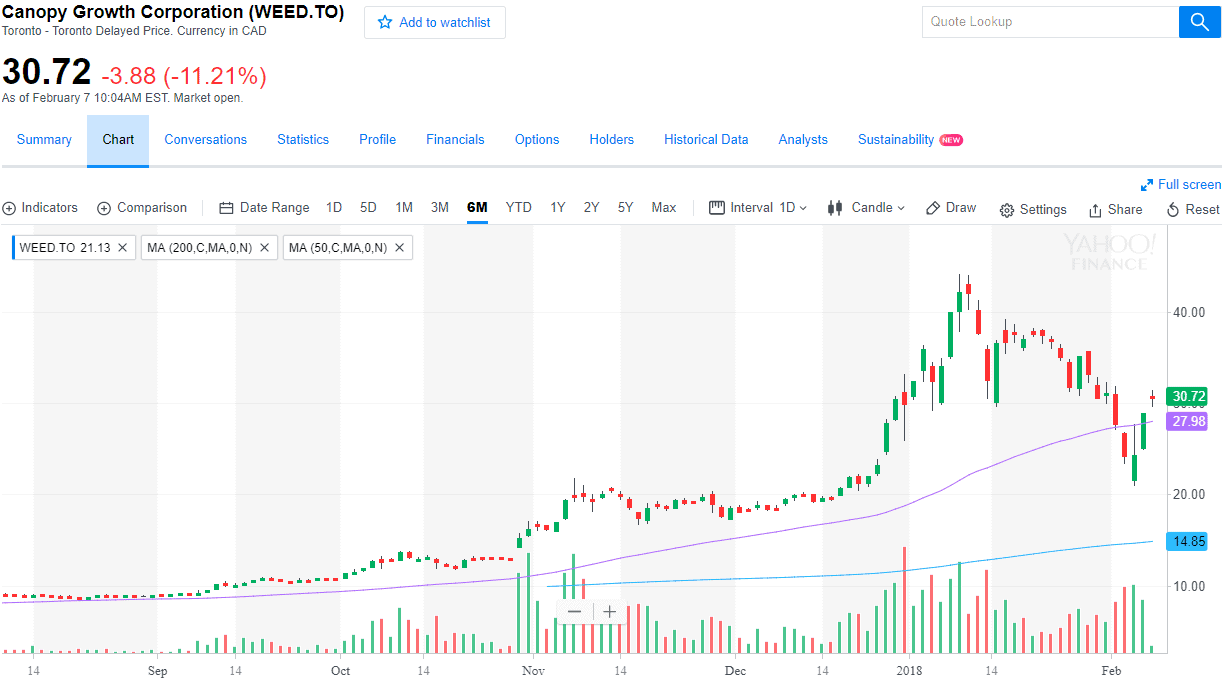 The largest cannabis company is hands down Canopy Growth Corporation, stock symbol WEED. It trades on the Toronto Stock Exchange (TSX) and has a market capitalization of roughly $5.53 billion. It also has a very large over-the-counter (OTC) presence. Canopy is the goliath of marijuana companies, however we are not just talking about a company that cultivates and dispenses legal marijuana in Canada. Canopy is a complex company that likes to acquire companies, aggressively at times, and works in the venture capital sector as well. It currently has contracts to exports medical cannabis to Germany, Chile and Australia. You can see that as of February 7th, 2018 it was holding over its 50 day moving average (dma) which is a sign of strength, but watch for it testing its 200 dma. 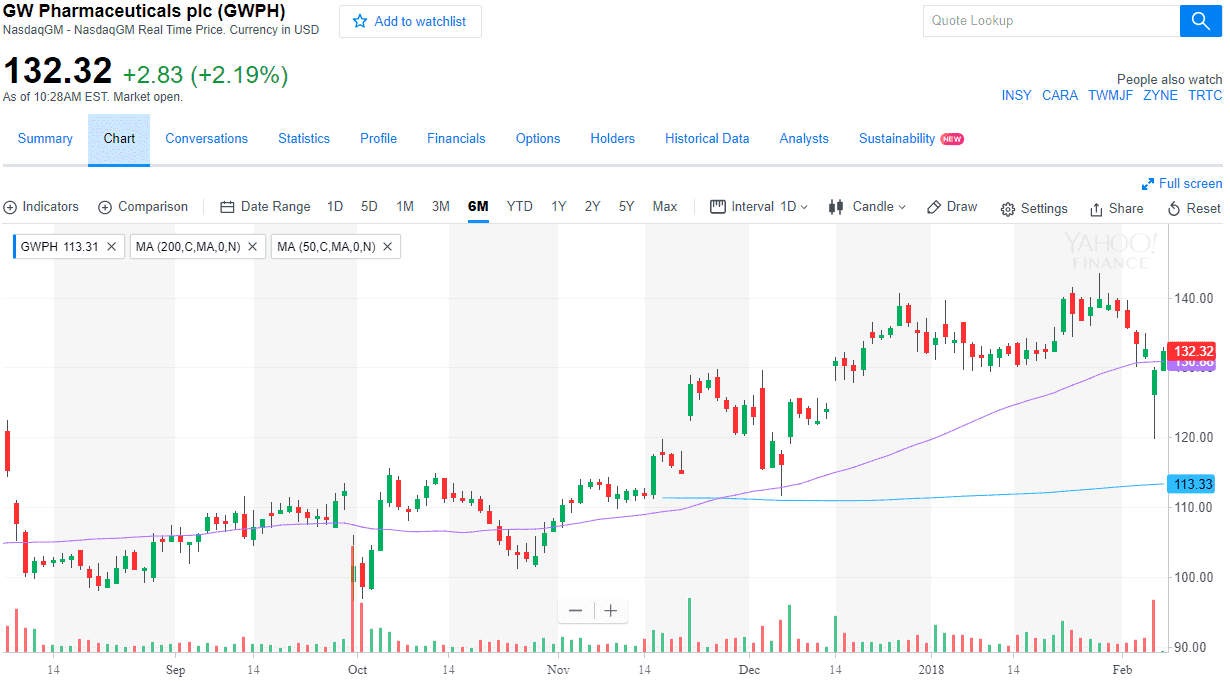 GW Pharmaceuticals (GWPH) trades on the Nasdaq and has a market capitalization of roughly $3.29 billion. GW Pharmaceuticals is your typical gigantic pharmaceutical company and certainly there are parallels that can be drawn between cannabis companies and pharmaceuticals, but we will save that discussion. GWPH makes it onto the list because they have an FDA approved synthetic marijuana pain relieving drug called Savitex. You can see that it made a hard dip below its 50 dma but has rallied back with the rest of the market. Take note though that the 50 dma did cross its 200 dma in late November last year. Investors need to watch this stock closely. It also has some options with liquidity that could be considered for some more levered positions or as a hedging alternative. 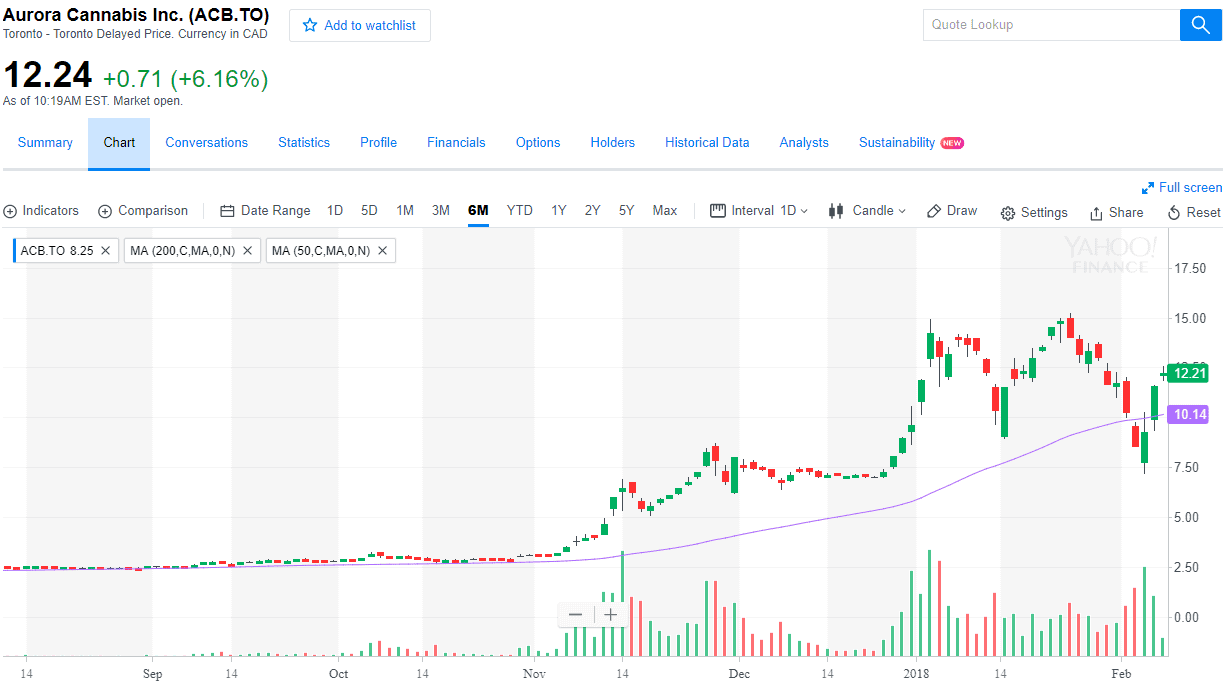 Aurora Cannabis Inc. (ACB) trades on the TSX and has a market capitalization of roughly $5.42 billion with a large OTC presence as well. Aurora has been very competitive with Canopy, also aggressively acquiring companies, however it sticks to mostly medical marijuana growth and dispensing. They have medical marijuana exporting contracts with Germany and the European Union. You can see that the stock has not been around long enough for a relevant 200 dma, but it is following its 50 dma as a level of support similarly to Canopy. 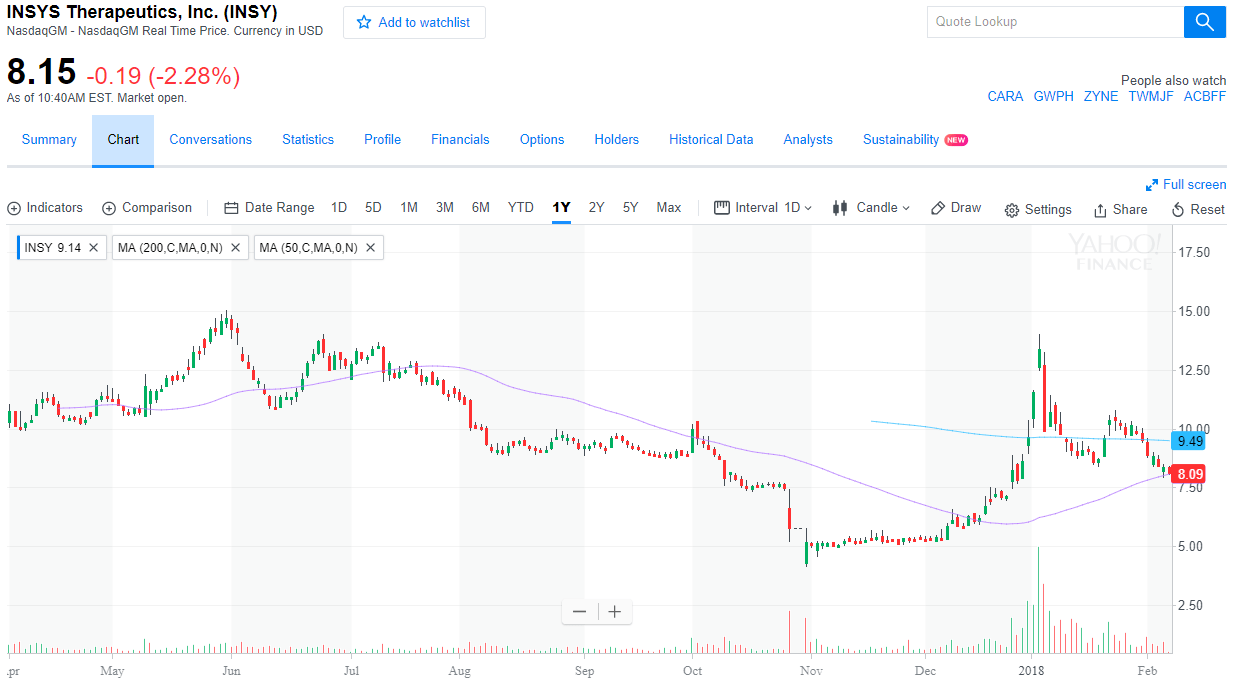 Insys Therapeutics (INSY) trades on the Nasdaq and is a well known pharmaceutical company here in the United States with a market capitalization of roughly $611.46 million. Insys is being illustrated because it is a clear example of company specific risk. The stock is a mess with significant struggles starting mid 2017. The billionaire owner of Insys is John Kapoor and he was arrested last October leading to a sharp drop in share price. Kapoor was accused of bribing doctors and letting his opiate based drugs leak into the black market contributing to the considerable opioid crisis facing the country. Insys makes it onto this review because they also have FDA approved synthetic marijuana based anti-nausea drugs Marinol and Syndros. You can see the stock is struggling still with the 50 dma well below the 200 dma. Be very wary of Insys Therapeutics Inc. It also has options with some liquidity to consider. 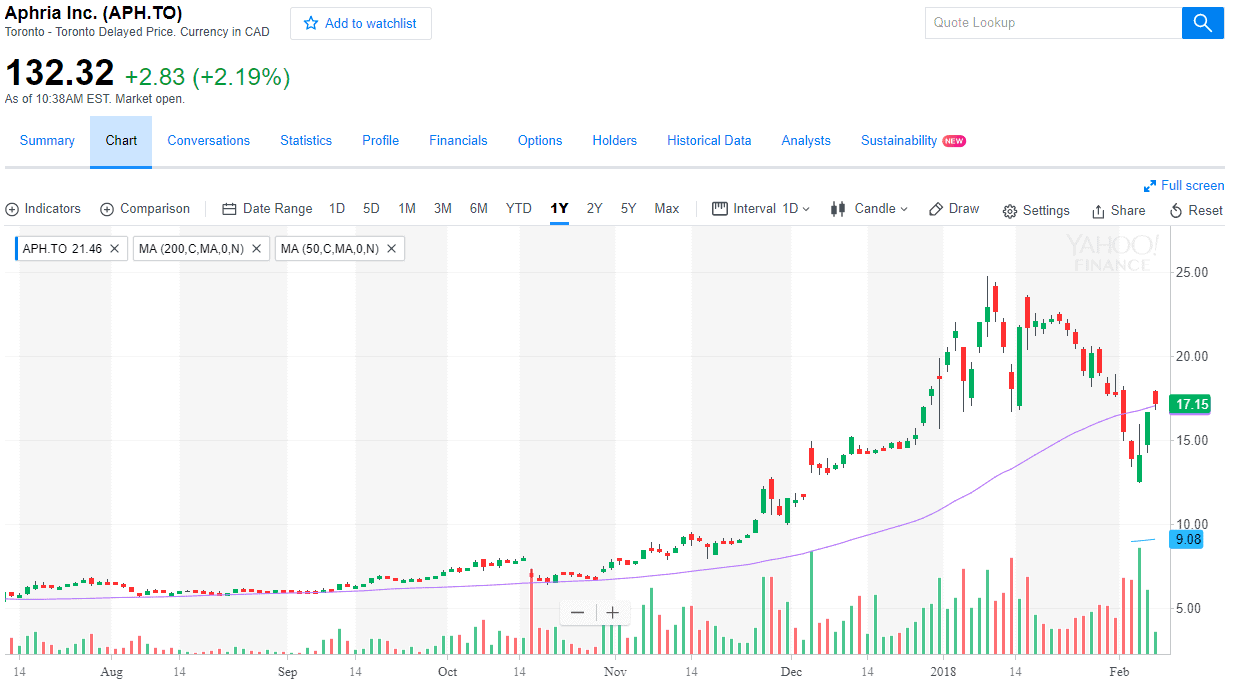 Aphria Inc. (APH) trades on the TSX but also has a large OTC presence. On the TSX Aphria has a market capitalization of roughly $2.67 billion. Aphria is also a major producer of medical marijuana with exporting contracts with Australia. They are also trying to establish a big presence in the U.S. with offices currently in Florida in hopes they may earn an exporting contract to the U.S. if marijuana is ever descheduled by the federal government. Aphria is also young but you can see that it has been following its 50 dma for support and like its other Canadian counterparts, has also managed to rally back.

One of the remarkable commonalities between the Canadian cannabis companies reviewed in this article is that they all want in on the recreational marijuana industry. All of Canada is likely to legalize adult-use recreational cannabis sometime this summer and these companies are willing to risk a great deal to try and dominate the recreational market. Share prices most certainly have gone up more than they would have, potentially over inflating prices as investors also anticipate Canada’s legalization of cannabis. While it may be a very reasonable risk to take, investors should always be wary that what they are anticipating is already priced into the market. Should Canada for some reason decide to delay recreational cannabis legalization or change its mind, investors should anticipate sharp selloffs.

As an IAR, I tended to refer clients more to Exchange Traded Funds or ETFs rather than individual companies since they can often be less volatile than their individual components. A single stock has what is referred to as company specific risk, which was referenced when reviewing Insys Therapeutics. It is a fancy way of saying that a company can have its own internal issues that causes its share price to suffer even though the overall sector it belongs to may be doing just fine. When an investor buys an ETF there may be less volatility in the share price relative to its components since it is not dependent on any single stock but the weighted average of all the stocks. ETFs are nice alternatives to individual stocks due to the built in diversification, but they also cost less in fees than mutual funds while having the intraday liquidity of an individual stock. Let’s take a look at a couple of the larger cannabis related ETF’s if for no other reason but to use them as a benchmark for the cannabis sector.

The two largest ETFs are Horizons Marijuana Life Sciences Index ETF (HMLSF), trading on the TSX, and ETFMG Alternative Harvest ETF (MJX), trading on the Nasdaq. Horizons Marijuana Life Sciences Index ETF (HMLSF) is the aggregate of 28 different cannabis stocks including the above stocks reviewed. In fact, Aurora, Canopy and Aphria are its three top holdings in that order. ETFMG Alternative Harvest ETF (MJX) will see its symbol changed to MJ starting February 9th, 2018. The ETF may also get shutdown by its custodian, U.S. Bancorp, due to concerns about the illegal federal status of marijuana in the United States. The original focus of the fund was Latin American Real Estate and the transition to marijuana stocks seems to have thrown U.S. Bancorp off. It is a global fund that also includes the above reviewed stocks along with 26 other companies. You can see that with both ETFs, volume only really began to build at the beginning of this year, 2018. 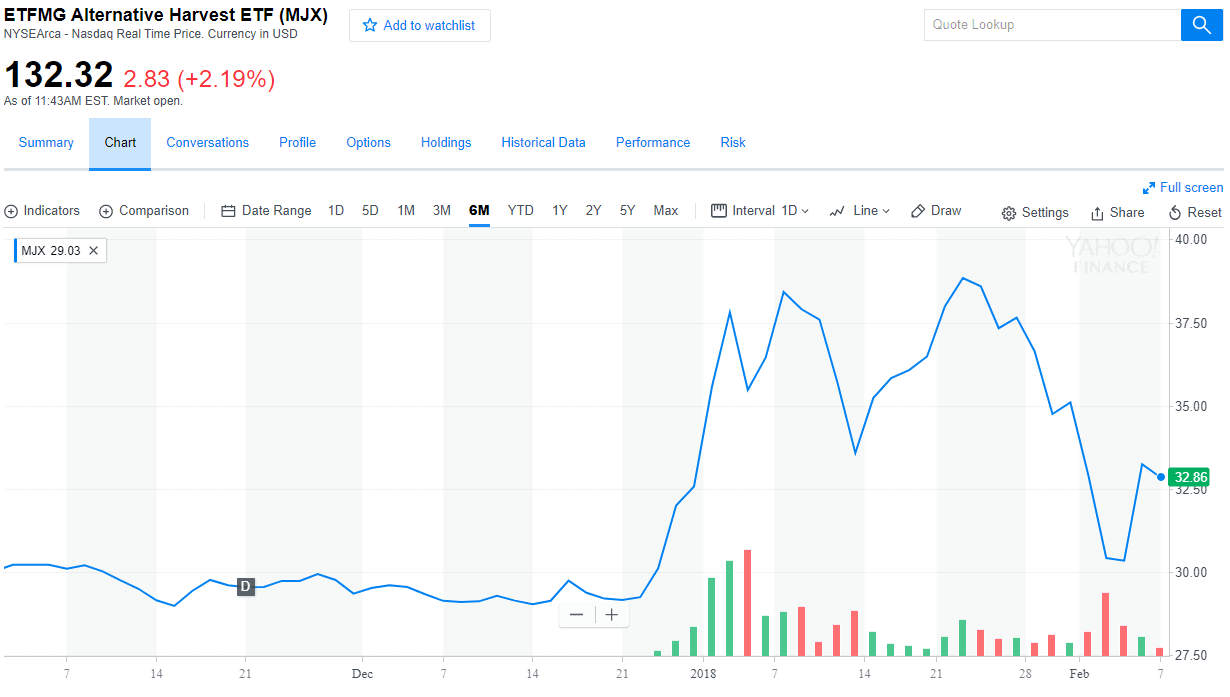 Now that we have laid somewhat of a foundation for the cannabis sector we can build on it as the market continues to evolve. We will continue to look at technical indicators for short-term traders and also the macroeconomic picture for the longer-term investor. There is likely to be continued volatility while perspectives and laws around the world continue to shift on marijuana. As Todd Denkin has stated many times here at the The National Marijuana News, “Marijuana; It’s the most complex and contentious prohibition issue in the last half century.” There may be no better example of just how contentious of an issue it is than analyzing the cannabis sector of the stock market during what may be the most economically volatile period the United States has ever know. It may bring a whole new meaning to relative strength.