According to the site Axios, a person close to President Trump has reported that the president not only supports Philippine President Rodrigo Duterte and his approach to dealing with the Philippine drug problem by permitting both police and vigilantes to murder suspected drug dealers and users on the streets, but would also like to see something similar here in the United States. Since Duterte took office, reports suggest that more than 7,000 people have been murdered in the Philippines as suspected participants of the drug trade, less than half of them by police. 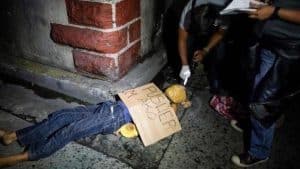 When bodies are found in the streets of the Philippines, they often have their hands bound behind their back and their faces wrapped in tape. The United States is still not clear on Trump’s stance towards the legalization of marijuana, but news of his possible support of mass executions with no judge or jury is certainly unsettling. 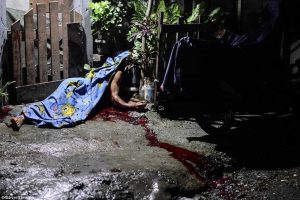 President Donald Trump considers drug traffickers to be as bad as serial killers and would “love to have a law” that executes dealers in the U.S., unnamed sources told Axios.

While he admits that such a law would be impossible to pass, the head of state may support legislation that requires a five-year minimum sentence for dealers selling as little as two grams of fentanyl, Axios stated.

The government must make drug dealers fear for their lives, Trump has told associates, pointing to Singapore and the Philippines — where offenders can face death — as examples.

Trump’s comments mirror those of Philippine President Rodrigo Duterte. The controversial leader gave police the authority to execute drug peddlers — Duterte has even admitted to personally killing criminal suspects — but the matter has morphed into a human rights situation amid widespread reports of extrajudicial killings.

Trump “often jokes about killing drug dealers,” a senior administrative official told Axios. “He’ll say, ‘You know the Chinese and Filipinos don’t have a drug problem. They just kill them,'” the official said.

According to Axios, Trump’s team is reportedly discussing the prospect of adopting elements of Singapore’s zero tolerance policy, such as more anti-drug education in schools.

The murders in the Philippines are beyond gruesome and any support for the executions by members of the executive branch could send the entirely wrong message to those that strongly opposed the legalization of marijuana. The movement to legalize marijuana here in the United States has had a continuous theme of decriminalizing marijuana, rather than using the criminal system to deter the drug trade. Does hearing this make clear President Trump’s stance on legalizing marijuana nationally?