Depression is an all too common mental disorder that is loosely defined as going through at least two weeks of “low mood” which is constant through most situations. Depression is usually accompanied by feelings of low self-esteem/self-worth, low energy, loss of interest in usually pleasant activities, and even strange aches and pains that seemingly do not have a clear cause. This type of disorder can also alter perceptions as folks suffering from depression occasionally report having false thoughts or seeing or hearing things that others cannot.

There are several different forms of depression such as major depressive disorder (MDD), bipolar disorder (manic depression), dysthymia, and seasonal affective disorder. While they all may present different types of symptoms they all have the potential to take over someone’s life and make even the simplest of daily activities a sometimes insurmountable hassle, negatively impacting a person’s personal life, education, or career, as well as sleep, eating habits, overall health, and happiness. It is estimated that approximately 350 million people across the globe suffer from a form of depression with 2–8% of adults with major depression end up committing suicide and about 50% of people who die by suicide had suffered from depression or another type of mood disorder.

Does Cannabis Help Fight Depression? cannabis and depression Does Cannabis Help Fight Depression? legal weed news marijuana and depression marijuana legalization Marijuana News medical marijuana programs weed and depression weed newsDepression can stem from a number of different causes such as genetics, loss, abuse, stress, as well as other negative major life events and is typically treated with a combination of counseling and antidepressant medications. However due to the potential negative side effects of many antidepressants, folks have been turning to medicinal cannabis in order to help fight their depression. So how exactly does cannabis actually help one combat this mood disorder?

Cannabis is a completely natural remedy that stimulates a person’s endocannabinoid system and accelerates up the growth of nervous tissue with minimal (if any) side effects.It can also enhances one’s mood while simultaneously eliminating anxiety and the insomnia that often accompany depression. It also provides the patient with added focus and energy which are often affected when a person is suffering from depression. This occurs due to the plant’s significant influence over the endocannabinoid system and the cannabinoid receptors CB1 and CB2. The cannabis plant contains over a hundred different cannabinoids with the most well known and researched being Tetrahydrocannabinol (THC) and Cannabidiol (CBD). When these cannabinoids enter the human body they quickly latch on to the body’s cannabinoid receptors and help regulate a person’s mood when suffering from a mental illness such as depression.

Does Cannabis Help Fight Depression? cannabis and depression Does Cannabis Help Fight Depression? legal weed news marijuana and depression marijuana legalization Marijuana News medical marijuana programs weed and depression weed newsSeveral studies have gone on to research the effects medical cannabis has on individuals that are suffering from different forms of depression and the majority of the results point to how effective the cannabis plant can be for treating these types of conditions. According to a 2006 study by Montreal’s McGill University folks that are suffering from depression and used cannabis even occasionally reported significantly lower symptoms than the participants who had been undergoing different forms of treatment. The study also showed that low doses of CBD and THC can help produce serotonin which acts as the body’s all-natural mood stabilizer and helps combat depression and its symptoms.

Another study conducted by the University Medical Center Utrecht in the Netherlands which investigated the effects THC has on the human brain showed that the cannabinoid reaches the endocannabinoid system in the brain directly and has the potential to change the response it has to negative thoughts and emotions or even images that were created by traumatic events. A separate study also showed that folks that were suffering from bipolar disorder had notably improved cognitive function after using cannabis medicinally.

Do you believe that cannabis can be used to effectively treat depression?

Sex and Cannabis with Todd Denkin and Ashley Manta Part 2 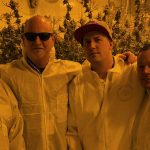