Planning on traveling but not sure where you’ll still be able to use weed? Check out the below article for details on different locales around the world where weed is either legal or decriminalized. Have you been to any of these locations before? Interested in visiting one or more? let us know about it in the comments.

When it comes to cannabis, every country has its own special relationship with the herb. Acceptance of marijuana ranges from “we respect your right to partake” to “we’re sentencing you to life in prison.”

Everybody knows Amsterdam is cool with the ganja. Ok, technically cannabis is illegal in the Netherlands, but we’ll get into the nitty-gritty on that later. But did you know you can smoke, sell, and cultivate cannabis in North Korea? Yeah. Weird, right?

We knew you’d want to know more because “where is weed legal” is one of the most frequently searched cannabis-related phrases in Google. So, pack a bowl (if you’re in a legal state or country), sit back, and enjoy our deep dive into marijuana legality around the globe.* 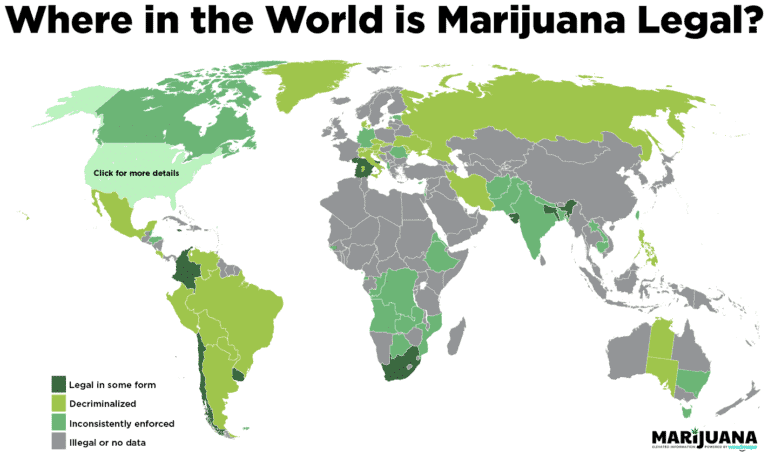 Toking up around the world

Uruguay was the first country to legalize marijuana in 2013. Residents are free to cultivate, consume, and distribute cannabis without punishment and the country recently allowed the sale of cannabis in local pharmacies. Tourists, however, need to be in tight with a resident to get their hands on the green in Uruguay.

Canada nationally legalized marijuana in 2017 and is crafting regulations to have a system for the legal cultivation, sale, and consumption of cannabis for adults in place by July 2018 so adults over the age of 18 can legally possess up to 30 grams of dried flower. Individual provinces can decide to raise the legal minimum age. A medical cannabis program run by Health Canada called the Access to Cannabis for Medical Purposes regulations outlines specific conditions that allow medical patients access to cannabis medicine.

Costa Ricans are allowed to have a “small amount” of marijuana. But there is no specific guideline that states exactly how much constitutes a “small amount.” In late 2016, the Costa Rican Legislative Assembly drafted a medical marijuana bill, titled the “Law for the Investigation, Regulation, and Control of Cannabis and Hemp for Medicinal, Food, and Industrial Use,” which is still undergoing revision.

Peru allows you to possess marijuana without repercussions as long as it’s for personal, private, and immediate use. In February, the Peruvian Congressional Committee on National Defense signed off on legislation to officially legalize the use of medical marijuana. Last week, the country’s Congress passed a medical marijuana bill by a vote of 68-5 that would allow production, imports, and sales of cannabis-derived oil. President Pedro Pablo Kuczynski is expected to sign the bill into law.

Spain respects the rights of private citizens to grow and consume cannabis. Thanks to this “you do you” philosophy, Spain has more than 800 dispensaries or private social clubs where enthusiasts lucky enough to get an invitation can consume cannabis while socializing with friends old and new. Just don’t get caught selling it. Cannabis distribution is not tolerated. Catalonia legalized cannabis this year.

In the Netherlands, marijuana is still illegal. But as long as you’re not bothering anyone, officials generally turn a blind eye. In Amsterdam, however, social use is perfectly acceptable thanks to a provision that allows for “coffeeshops,” where both residents and visitors can purchase cannabis products for on-site — and even outdoor — consumption.

Not legal, but generally accepted

Recreational and medical cannabis users in Germany have little to worry about when it comes to possession and consumption. Recreational users may face a fine if caught, but no criminal penalties. And their medical marijuana program requires insurers to cover the cost of products for patients with severe conditions.

Jamaica has long been known as a place where you can find ganja, but it wasn’t until 2015 that cannabis was actually decriminalized in the country. Individuals caught with 2 ounces or less face a $5 fine. This year, the country introduced its medical marijuana program. Visitors to Jamaica who have legitimate medical prescriptions from their place of residence can acquire a cheap permit to purchase and use medical marijuana while visiting the island.

If you’re in Portugal, small quantities of all drugs for personal consumption are considered non-criminal and you can safely carry and consume cannabis privately. You may still get fined or be given orders for rehabilitation if caught, but when it comes to practice, such cases are usually suspended. Do not grow it, however. Cultivation is illegal — even cannabis seeds are prohibited.

In Argentina, it’s OK to consume cannabis, but it’s illegal to sell, transport, or cultivate the herb. When it comes to medical marijuana, however, cannabis is available to qualified patients for free. In India, you can drink Bhang, a cannabis drink, but no other cannabis use is tolerated.

Visiting the Czech Republic? Medical cannabis is legal for locals and in many urban areas, Mary Jane is considered a low priority to authorities as long as you’re not consuming it in public.

Ecuador has decriminalized the personal use of up to 10 grams. While in Italy, medical and religious consumption is OK, but personal use — even small amounts — can net you a misdemeanor.

In Mexico, up to 5 grams of cannabis is decriminalized. In 2016, Mexico’s Senate approved a bill that would allow medical marijuana use by adults, which the Lower House of Congress passed in April of this year. President Enrique Peña Nieto signed the legalization decree in June.

Estonia doesn’t mess around. Possession of up to 7.5 grams for personal use is OK, but any more than that and you face up to five years in jail.

Up to 5 grams of cannabis is decriminalized in Austria while in Belgium, you can possess up to 3 grams without criminal penalty. Other countries that have decriminalized small amounts of cannabis include Bolivia, Brazil, Chile, Costa Rica, Croatia, Georgia, Greece, Italy Luxembourg, Malta, Moldova, Paraguay, Russia, Slovenia, Ukraine, and the Virgin Islands.

While the cultivation, sale, and use of cannabis is illegal in Switzerland, possession is decriminalized for small amounts. Products that contain less than one percent THC are allowed.

In Cambodia, it’s common practice for police to look the other way if locals are found in possession of cannabis and Israeli citizens can possess small amounts of cannabis without a criminal penalty. Smoking in public, however, is not tolerated and carries a fine.

No matter where you travel, be sure to familiarize yourself with the legality of cannabis and the full risks associated with its possession or consumption in that country.

* This is not an exhaustive list — that would be really long and you wouldn’t read it.

Where in the World is Marijuana Legal? | Marijuana