UFC Superstar Nate Diaz hasn’t fought in MMA since losing an extremely close majority decision to Conor McGregor in a fight that the majority of the media, fans and fighters alike thought he clearly won. Nate was in attendance for tonights UFC on FS1 event and when the cameras panned to him in the audience, he pulled out a weed joint and started smoking it.

Thumbs up to the guy in background who finds Nate’s antics to be hilarious. Nate Diaz’s actions surprised a lot of people including the commentators, prompting gasps and some smiles from other spectators.Given the recent surge in popularity, we shouldn’t be surprised if more instances like this pop up in the very near future. Marijuana could be a benefit to many more athletes for its ability to manage pain. 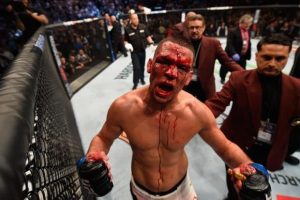 Nathan Donald “Nate” Diaz (born April 16, 1985) is an American professional mixed martial artist currently competing for the Ultimate Fighting Championship (UFC). He was the winner of The Ultimate Fighter 5. Diaz is the younger brother of former Strikeforce Welterweight Champion and WEC Welterweight Champion, Nick Diaz. Prior to signing with the UFC, Diaz competed in World Extreme Cagefighting, Strikeforce, and Pancrase. As of June 6th 2017, Diaz is #8 in official UFC lightweight rankings.

He holds notable victories over the likes of Conor McGregor, Donald Cerrone, Gray Maynard, and Takanori Gomi. Diaz is also tied with Joe Lauzon for the most UFC bonus awards, with 15 in total.[4] Nate Diaz, along with Conor McGregor, hold the record for the highest UFC Pay Per View buy with UFC 202.