Check out the below 10 albums to listen to while getting high. Any of your favorites make the cut? Any others you’d add to the list? Let us know in the comments below.

So let us do the curation work for you. Here are 10 current albums you’ll want to check out after you’ve exposed plant matter to flame – and yes, Bieber makes a brief cameo, but you’ll thank me later.

1. Courtney Barnett, ‘Sometimes I Sit and Think, And Sometimes I Just Sit’
Courtney Barnett is having an existential time crisis. She says as much on “Pedestrian at Best,” a song that so deftly expresses what this Australian rocker does best. She takes simple rock progressions and layers it with an instantly relatable stream-of-consciousness that belongs exclusively to Barnett. After first hearing previous hits “History Eraser” and “Avant Gardener,” I wondered if Barnett studied at the Frank Black School of Songwriting, where a lyric’s meaning is less meaningful than the way it sounds in the context of everything else. (Explanation: Read any Pixies lyric ever.) But now that Barnett has a couple records under her belt, it’s obvious she’s just doing her own thing. Also, this is an album title cannabis aficionados can relate with.

2. Rae Sremmurd, ‘SremmLife’
One of the first lyrics you’ll hear on “Come Get Her,” a Rae Sremmurd (drummers ear, spelled backwards) song that has turned plenty of heads, is “I’m a pothead, true enough.” Now that we have that out of the way, welcome to one of the most exciting hip-hop records of the last year. Maybe you’ve heard hits “No Type” or “No Flex Zone,” but if you’ve not given the full-length a couple attentive listens, then you’re missing out on some of the freshest voices in hip-hop – namely brothers Khalif and Aaquil Brown. Worth noting: Fans of J. Cole will dig this ish.

3. Rihanna, ‘Anti’
Consider this opening lyric on “James Joint:” “I’d rather be smoking weed whenever we breathe, every time you kiss me.” I hear you, Riri. And there’s more to Anti than the R&B diva’s cannabis-worshipping, jazzy interlude. Case in point: Riri’s collab with Drake on “Work,” a richly layered song that is worthy of those expensive headphones you got for Christmas. Also, note this heartfelt apology from Drake: “Sorry if I’m way less friendly/I got niggas trying to end me.” Yikes. Take care, D.

4. Deerhunter, ‘Fading Frontier’
Following on 2013’s Monomania, Deerhunter’s latest is a sleepy, stoney pop daydream. The band seems as comfortable awash in reverb and cooing harmonies as they ever have been, but now there’s a confidence there that wasn’t as present in past efforts. From the lyrical “Breaker” to the psychedelic “Living My Life,” this is what happens when an indie darling grows up.

5. David Bowie, ‘Blackstar’
If you already feel you have closure with David Bowie’s too-early death in January, you’ve likely already listened to Blackstar – the atmospheric, full-length the artist released two days before his death. But if you’ve not yet gotten level-8 stoned and listened to some Bowie and had a good cry, consider Blackstar amid your playlist. From the title track’s staggering percussion to Bowie’s nuanced vocals in “Dollar Days,” this late-era excursion is as celebratory as it is sorrowful.

6. Grimes, ‘Art Angels’
How very exciting it’s been, listening to Claire Boucher grow into the artist she’s become. On “Art Angels,” Boucher (a.k.a. Grimes) flips the script on pop music with a collection of music that is as delightful (the jittery “Flesh Without Blood”) as it is dangerous (the frenetic “Kill V. Maim”).

7. Jack Ü, ‘Skrillex and Diplo present Jack Ü’
When two of EDM’s most audacious producers gather behind the decks, this is good news for kids in headphones and on dance floors alike. This Skrillex-Diplo collab truly lifts off when the producers invite others into the mix: 2 Chainz’s absurd rhymes on “Febreze” are perfectly insane. Kiesza’s manipulated vocals on “Take Ü There” are perfect for the club, and the song is one of many examples on the record of the DJs’ affinity for dub and reggae-associated beats. And Bieber’s turn on “Where Are Ü Now” is nearly as infectious as the singer’s recent hit “What Do You Mean?”

8. Sia, ‘This is Acting’
What happens when the mainstream suddenly falls in love with critic’s darling Sia and anoints her a modern FM-ready pop diva? “This is Acting” is what happens after “Chandelier” and “Elastic Heart.” And fans of Sia’s out-there pop stylings will find a lot to love, and admire, including the familiar “Alive” and the hotly produced “Cheap Thrills,” which will get you moving – even on an indica night.

9. Ryan Adams, ‘1989’
Here’s a trick for your next weed-enhanced dinner party: Don’t say a word before putting this record on in the background, and see if anyone takes notice to Adams’ delicate song-by-song cover of Taylor Swift’s “1989.” A whispered “Blank Space” and a bare-bones “Shake it Off” are only the beginning – and just watch as your friends try and figure out where they’ve heard these hushed alt-country songs before.

10.Elvis Depressedly, ‘New Alhambra’
Marijuana enhances the act of music discovery, so type in Elvis Depressedly into your Spotify or Pandora and see where it takes you. He’s particularly pointed on “Wastes of Time” and the title track, but enjoy the rabbit hole of related artists – and find your new favorite dream-pop songwriter at the same time.

Marijuana Music: The 10 Best Current Albums to Get High By 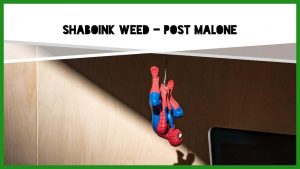