Check out these 13 weed-related movies that are now available on Netflix. Any of your favorites make the cut? Any you’d like to add? Let us know in the comments.

The ultimate guide to stoner movies on Netflix

The term “stoner movie” is often meant as an insult, intended to denote a film with no artistic value beyond making someone drugged out of their mind giggle. Despite what you’ve seen in movies and government propaganda, weed doesn’t turn you into a mindless zombie. It helps you appreciate silliness on a deeper level and can lead to unrealistic opinions about the importance of Pink Floyd, but your brain still works.

Netflix doesn’t let you search “stoner movie” on its site. The best you can do is “late night comedy,” which leaves out many thoughtful options. But fear not: We’ve crawled Netflix to find the best funny movies to watch while high as a kite. And as a bonus, we paired the kind of weed that goes with each one.

If you’ve smoked weed for any length of time occasionally, you’re going to ask yourself, “Is weed bad for you?” The long-term effects are complicated, in part because it’s difficult for researchers to get the funding and support needed for comprehensive studies. In this 2007 documentary, comedian Doug Benson explores the downsides of irresponsible use by pushing his cannabis consumption to the limits for 30 days. Hysterically funny and oddly thoughtful, Benson interviews everyone from medical doctors to political figures to explore the impact of American drug policy. 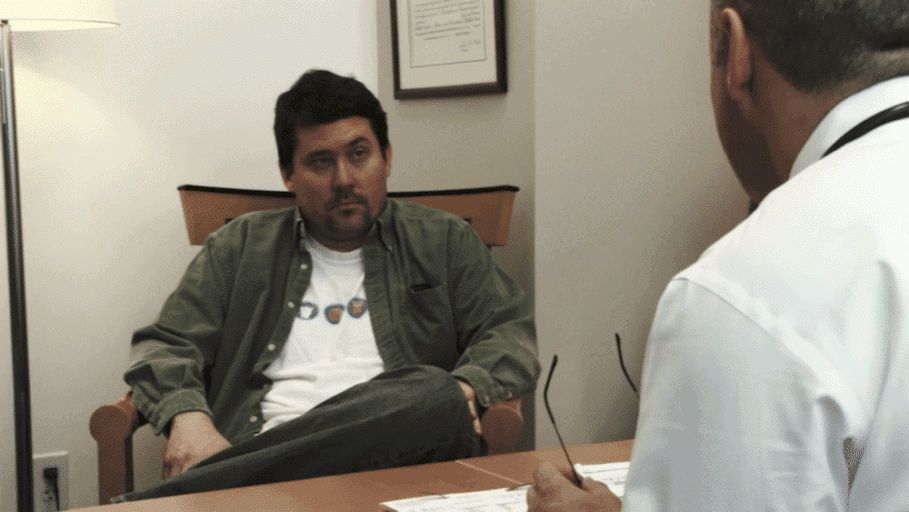 Cocaine’s cautionary tale is Scarface, but for too long the best pot fans could muster was Half Baked. Then came Kid Cannabis. Based on the true story of Nate Norman, a stoner high school dropout from Idaho who started a marijuana empire that netted millions of dollars before violence and territory caught up with him. Beginning as a light-hearted drug comedy before slowly evolving into something darker, Kid Cannabis has a Fargo like quality to it. 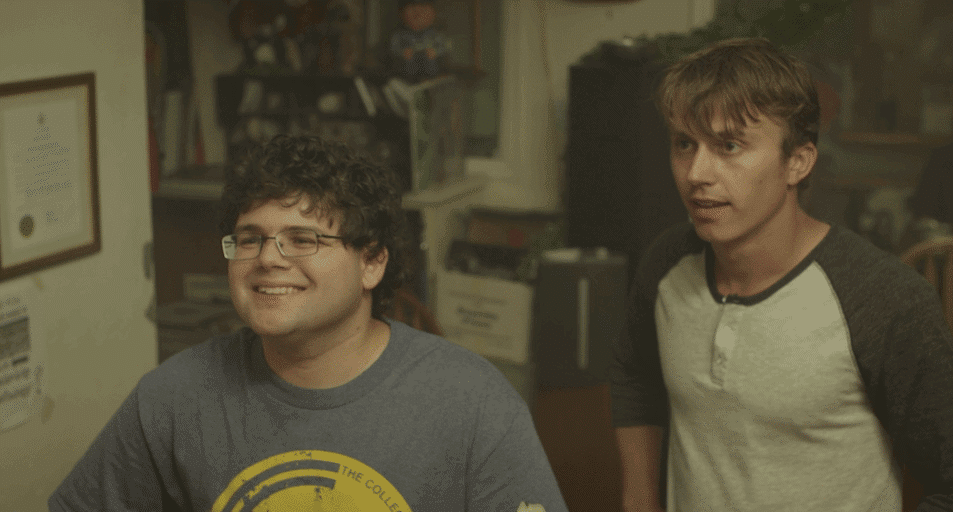 We can’t prove that Good Burger is a stoner movie. In fact, it’s a downright wholesome wacky comedy that’s fit for children of all ages. That doesn’t mean it isn’t a great way to spend a stoned Sunday afternoon. A spinoff of Nickelodeon’s All That, Good Burger is a screwball comedy about a couple of fast food employees trying to save their burger joint. Starring Kenan Thompson, Kel Mitchell, and a brilliant Abe Vigoda, Good Burger has a joke-per-minute ratio that’s staggering. It’s worth watching alone for the conversation with a dog scene, but if you’ve ever fallen in love with quirky classics like Pee Wee’s Playhouse, you’re ready for the charms of Good Burger. 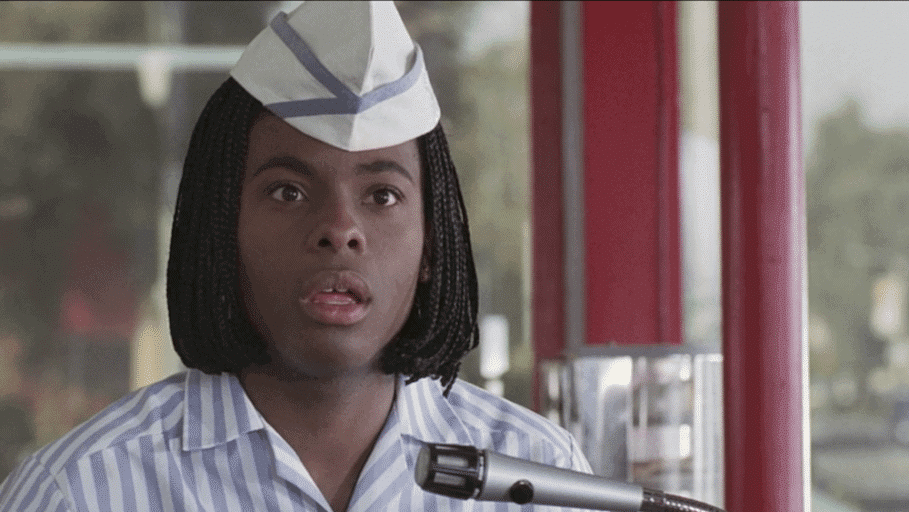 4) Tenacious D in The Pick of Destiny

Before Jack Black was a household name, he was part of a Tenacious D, a sketch comedy musical duo who claimed to be the greatest band in the world and had the musical chops to back it up. They claimed in song to have defeated the devil to get his powers, but the real story was never told until their film debut …In the Pick of Destiny. Whether fighting lousy crowds or dueling with the Devil (a brilliant cameo by Dave Grohl), Tenacious D never gives up. 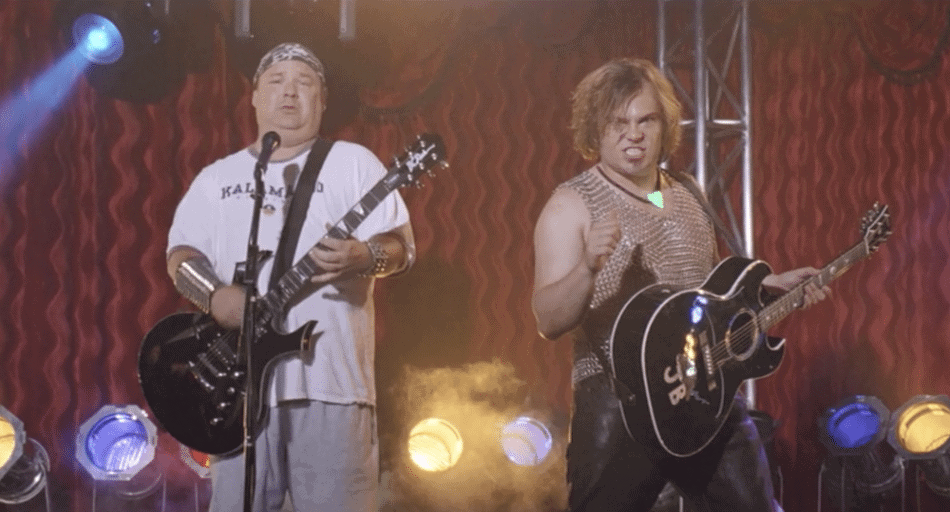 If you smoke pot, there’s a slim chance you haven’t already seen Kat Williams The Pimp Chronicles Vol. 1 at least once, but that doesn’t mean you should probably watch it again anyway. Great standup can bring new light to topics you’ve already heard discussed a million times before. Weed, race, Iraq, Michael Jackson—none of those subjects are fresh, but Williams injects each with his specific voice. Also, it inspired this remix, which is so catchy it should be on the radio. 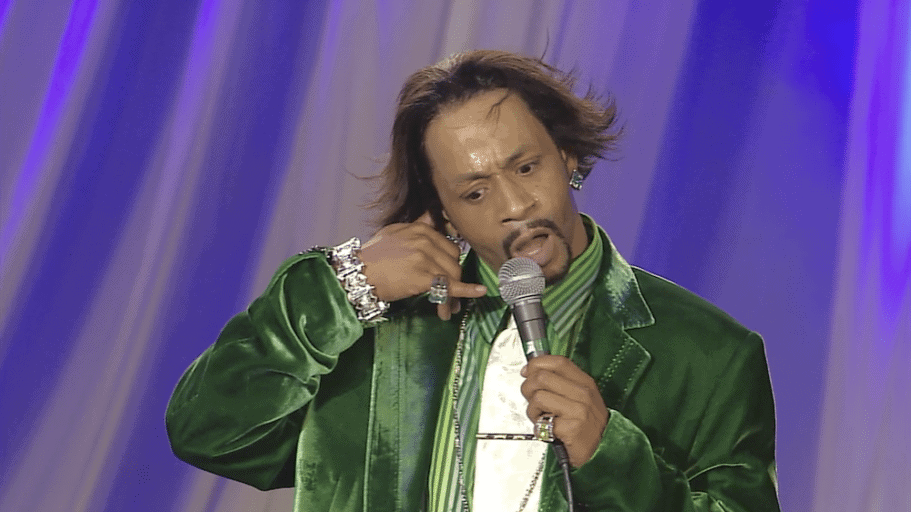 Tapping into extreme sports’ ideal of escaping boredom at any cost and focusing that energy on the human body instead of a skateboard, Jackass represents a primal form of comedy. Part human achievement, part Three Stooges, this film sees the crew at the height of their popularity and creative energy. Science will never be able to explain why trying to catch a shark using Steve-O as bait or Johnny Knoxville being hit with an anti-riot mine is comedy gold. We have weed for that. 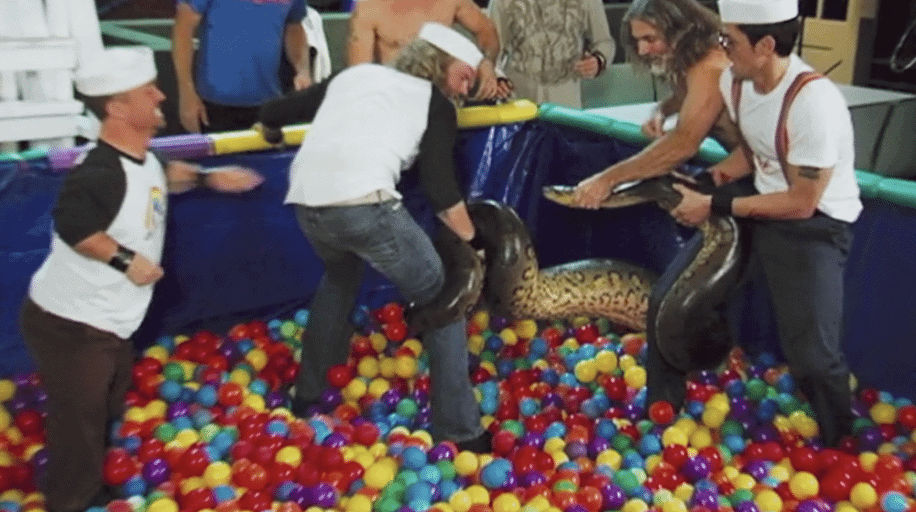 Based on the synopsis of Makkhi, it’s easy to understand why pot might enhance the experience. “When a ruthless billionaire kills a man in a bid to steal the woman he loves, he’s reborn as a common housefly with a taste for revenge.” This Bollywood action film is as absolutely bonkers as it sounds. As good as Makkhi is, it’s also the sort of movie you’ll have an easier time pitching if your buddies are high. Thankfully, it’s a hundred times more entertaining when you’ve got a buzz.

Kind of weed: Indica (but not very much)

Looking for a visual feast that feeds your brain and your heart while you’re rocking a buzz? Amelie is here to win your heart. Jean-Pierre Jeunet’s 2001 romantic comedy tells the tale of Amelie, a Paris waitress who decides to subtly impact the lives of everyone around her while ignoring her isolation. Full of whimsical imagery and a profound sense of magic, Amelie is the perfect companion to a warm, thoughtful high.

Before watching a film like Sausage Party, we suggest that weed smokers get as high as possible, which is why this film is paired with dabs. Based on a story idea from Super Bad’s Evan Goldberg, Seth Rogen, and Jonah Hill Sausage Party is the Pixar movie of your parent’s nightmares. The food at your local grocery store discovers they don’t go to heaven when they’re bought but instead are brutally murdered in our homes for meals. Their journey of acceptance and the brutal revolt that follows is a work of offensive, absurdist genius. As profane as it is funny, Sausage Party is the first stoner come to make you feel guilty when you get the munchies. 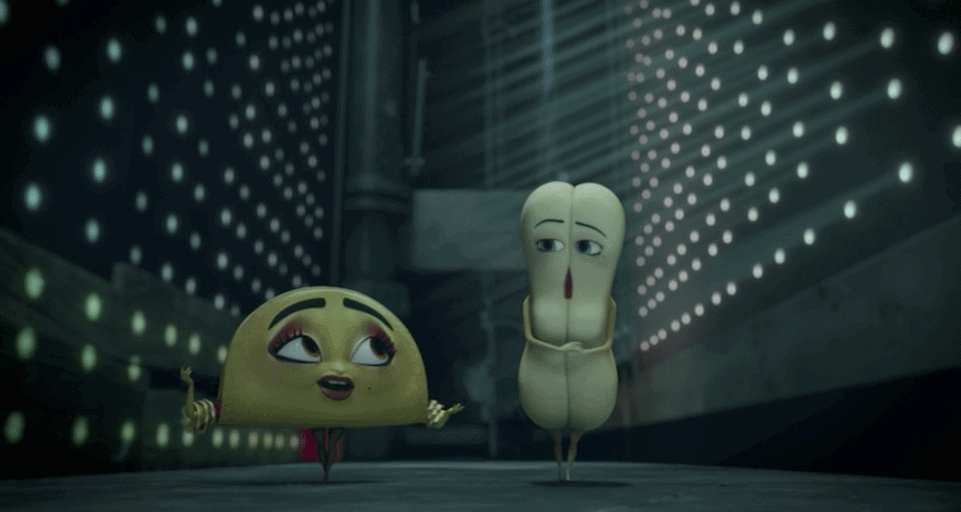 Waking Life is an artistic achievement that every fan of film should sit down and watch from start to finish. Lovingly animated via Rotoscoping, a technique where live actors’ performances are painted over after filming, Waking Life is 101-minute philosophical discussion where each person’s words are augmented through the artists’ swirling colors. Dealing with the nature of dreams, free will, and existentialism, Waking Life sometimes feels like a stoned conversation, albeit one that leaves you with questions you never thought you’d ask. It’s a little odd in 2017 to see Alex Jones back when he was just a standard underground conspiracy theorist, but even his segment is beautiful. If you’re looking for a cerebral challenge, Waking Life is here to school your stoned soul. 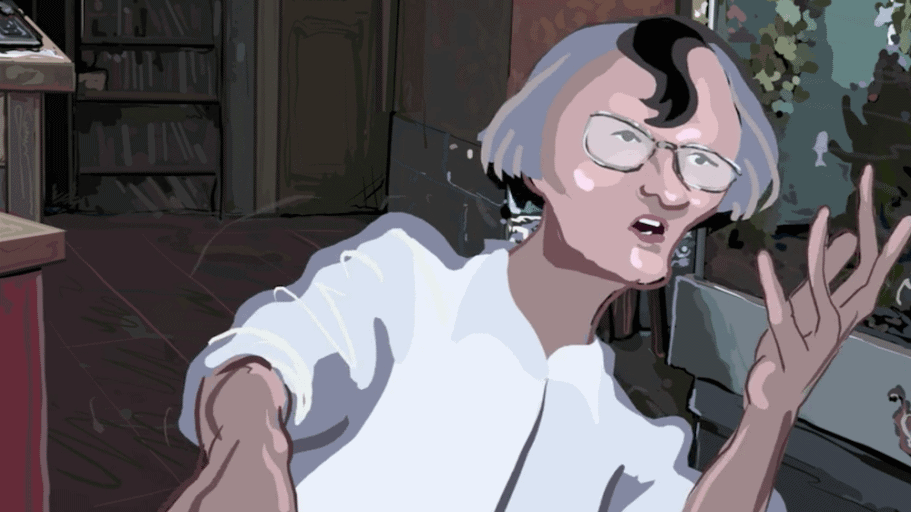 When you’re high, bad movies become a special treat. Something about the goofy buzz of marijuana adds a little extra something to the joy of watching bad movies with your pals, shouting jokes at the screen and laughing along. You can recreate these great memories during your solo smoking sessions with Mystery Science Theater 3000’s classic and new episodes on Netflix. Each episode of this sci-fi comedy classic features a man heckling a terrible B-movie with the help of a group of robots. Covering every genre of film, with regular breaks for goofy skits and inventions, MST3K has lived in the hearts of fans for almost 30 years. It was recently rebooted by Netflix with wildly successful results. Start with the original series and Manos: The Hands of Fate, then work your way through the rest. Start rolling; you’ll be watching for awhile. 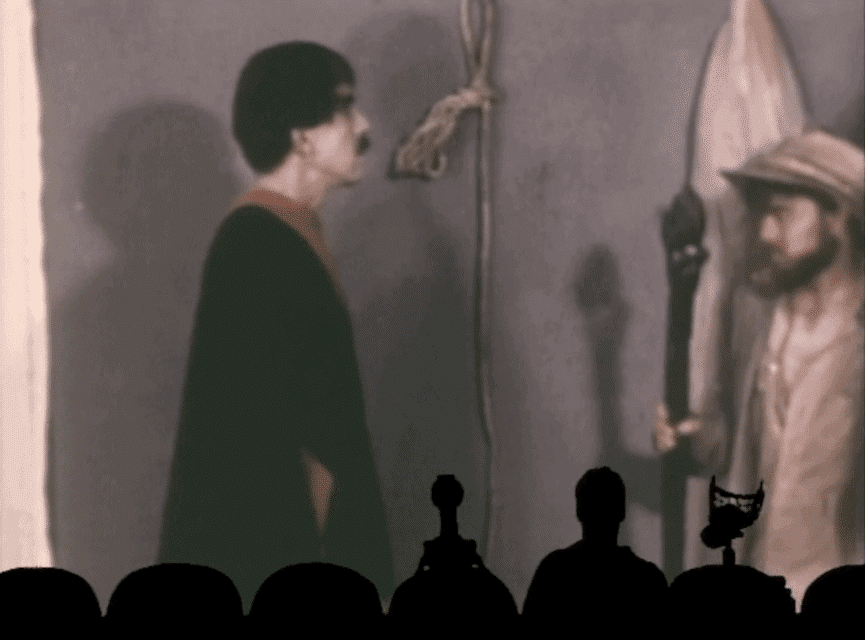 Ready to start thinking again? DMT: The Spirit Molecule is a documentary about DMT, a powerful psychedelic our brains produce but which can be simulated in the natural world. With chemical assistance, the human mind is capable of incredible things, seeing what some would argue is another spiritual plane of existence. You don’t ever have to do DMT to be curious about its wonders, but when you’ve had a nice relaxing dose of indica, this beautifully shot and thought-provoking documentary scratches exactly the right itch. 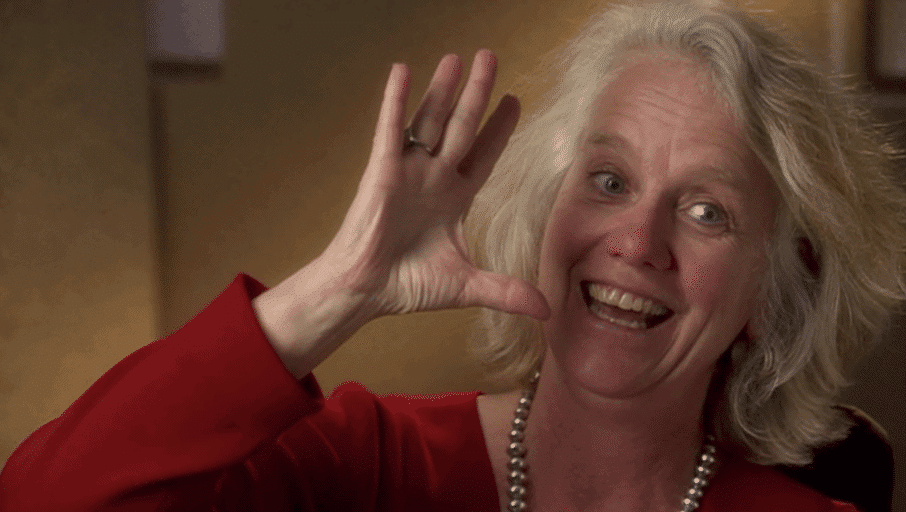 No one of a certain age and predilection for THC has gone unexposed to the genre-hopping violence of Quentin Tarantino, but his sole adaptation (from Elmore Leonard’s Rum Punch) is as airtight as he gets. The inimitable Pam Grier in the California noir’s title role is alone worth your attention, though what bong owner could resist Samuel L. Jackson and Robert De Niro as a mismatched and terribly dressed criminal duo? Throw in a Chris Tucker cameo, a follow-the-money caper with plenty of twists and turns, and a bikini’d Bridget Fonda as Jackson’s pot-obsessed “surfer” girlfriend, and you’ve got a recipe for a great night in.  —Miles Klee 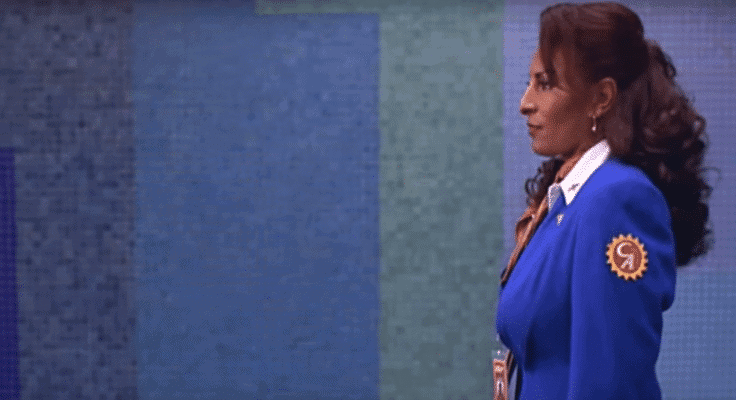