These funny cannabis clips by Dave Chappelle, Joe Rogan and other awesome comedians about smoking pot are hysterical. Every cannabis enthusiast can relate to these stories. Do you have any funny pot smoking stories?

Cannabis has been a long joked-about topic for comedians, and there are piles of material out there about everyone’s favourite herb.

Since typing “cannabis comedy” into Youtube’s search bar is a one-way ticket down a never-ending rabbit hole of hit-and-miss comedy, here’s a curated list of some memorable comedy nugs on the topic of that sweet Mary Jane.

It’s no surprise that Doug Benson is the king of cannabis comedy. With a film and TV resume that has titles like Chronic Con: Episode 420, Super High Me, High Court, The Greatest Movies Ever Rolled, Marijuana: A Chronic History, Totally Baked, 4.20 Hour Standup, and of course, his Youtube show called Getting Doug With High, a talk show where celebrities smoke weed and get interviewed. My pick for one of his best? His anti-pot commercial bit.

Louis CK has a few great bits about weed, but one of my favourites comes from his special, Live at the Comedy Store. In it, CK touches on weed and texting.

Veteran comic Todd Glass is a guy that just wants to smoke marijuana without being “pro-marijuana”. Check out the full special here.

Outspoken marijuana enthusiast, Ari Shaffir is an underrated comic who needs more attention. Good thing he just released a new double special on Netflix called, Double Negative and it is hilarious. This marijuana joke so funny.

This bit from Joe Rogan’s comedy special, Triggered is well constructed and cohesive bit. One thing about Joe is that he is kind of a jock-bro, while also being a giant pothead, which makes it hard for some people to understand his comedy. He is very good at taking a simple subject and creating a very unique and funny perspective. If you’re on the fence about his comedy, go watch Triggered on Netflix.

If you socially get high then you’ve probably been part of some strange weed conversations. Dave Chappelle nails the experience with this bit.

While on the subject of marijuana conversations, Brian Posehn tells a really funny story about smoking up with fans.

Chris Rock is one of the best in the game. Here he talks about not just weed, but drugs in general, and it is solid. It’s from the special Never Scared from 2004.

One of my all time favourite bits on weed is by Katt Williams from his special, The Pimp Chronicles from 2006. Jus add-tot sit back and enjoy this classic hilarious bit. 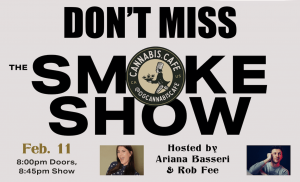