For the most part, cannabis and its related products have been designed with males users in mind when it comes to marketing and product design. Attempts to reach both men and women mostly resulted in themes that were gender neutral at best. Kristina Adduci, the founder of House of Puff, is hoping to change that with her new line of feminine marijuana accessories and products. Geared toward upwardly mobile women who are seeking a more feminine aesthetic than usually found in most marijuana related products, Adduci intends on helping eradicate the stereotype of enthusiasts being lazy, grungy, “crunchy” folks through her stylish brand of paraphernalia.

There’s a certain breed of stylish, sophisticated, upwardly mobile woman — the type of girl who’s a regular at Sephora and does SoulCycle twice a week and occasionally drops $300 on a pair of shoes because she believes in treating herself — that the cannabis world has, until recently, kind of ignored. Maybe it’s because people assume she and her high-achieving, high-heeled sisters don’t smoke, or if they do, it’s just socially. Maybe it’s because cannabis is still, like so many areas of culture, largely male-dominated and thus sometimes blind to the needs and desires of women. Whatever the reason, entrepreneur Kristina Adduci is determined to bridge the gap between these women and weed with House of Puff, a New York-based company specializing in discreet, decidedly-feminine smoking accessories. 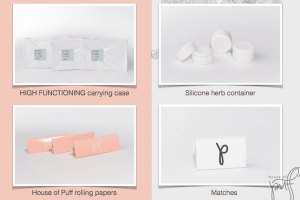 House of Puff’s signature product, the Lit Kit — a cheeky play on Kylie Jenner’s ubiquitous Lip Kit — launched earlier this month and contains an artist-designed ceramic one-hitter, rolling papers, matches, crutches, a pocket-sized silicone herb container, and a custom-blended candle made using local materials. The accessories come in a carrying case about the size of a makeup bag that says “High Functioning” on the outside — a jab, Adduci says, at those who still equate ‘pot smoker’ with ‘shiftless burnout.’ 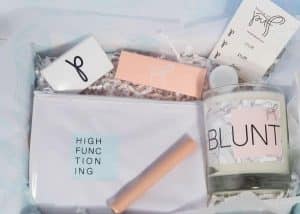 Due to suffering from an anxiety disorder, Adduci began experimenting with marijuana as an alternative to the prescription medications that she had been taking with little effect. Seeing that her options for cannabis accessories were severely limited to masculine and rather downright ugly devices, she came up with the idea to start her own line of products for the modern female smoker who is both into style as well as functional! While she does already have some competition in the market, she is still getting in on what some would call the “ground floor” as the industry is still blossoming and marijuana and its related products continue to become more and more mainstream. You can catch her full length interview with the folks at Merry Jane by following the link below!

Adduci, who is also the founder and editor-in-chief of the arts and culture publication Art Zealous, began smoking weed in adulthood to treat her anxiety. While she loved the chill it gave her after a long day at the office, she was less than impressed with the offerings when it came to paraphernalia. To be fair, she’s hardly alone in her complaint that the majority of smoking accessories are weirdly phallic, of poor quality, or are just plain ugly.