Meet the White Russian strain! Named after The Big Lebowski’s favorite beverage, it’s a daytime hybrid born of the popular White Widow and AK-47 hybrids, that leans heavily toward the sativa side of the family! Enthusiasts love it for its energetic and euphoric qualities while it also quickly helps those suffering from anxiety, stress, and depression. The high is very focused so you can still get things done throughout the day and is also said to help spark creativity in some!

Originally created by Dutch breeders Serious Seeds, White Russian is a cross of two legendary strains, White Widow and AK-47. An indica-dominant hybrid, it won the High Times Cannabis Cup “Best Overall” in 1996 and was for a time considered the strongest strain in the world at 22% THC. Presenting remarkable homogeneity for an f1 hybrid, White Russian is an extremely fragrant plant, smelling of sweet fruit and skunk even in its vegetative cycle. With a flavor that is smooth and spicy with undertones of skunk and earth, White Russian’s high is quite cerebral (especially for an indica), but can lead to couchlock when over-indulged. 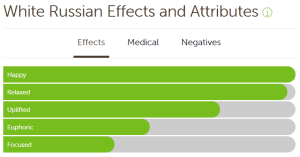 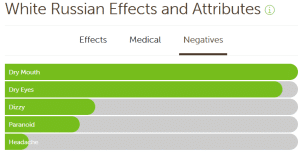 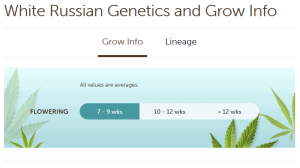 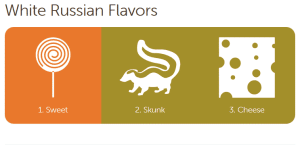 The buds are typically a light green in color with an abundance of trichomes and are generally fluffy. They also have a strong diesel and piney aroma. The smoke’s flavor is rather musky with natural floral and earthy tones to it, but is very easy on the lungs. Much like The Dude himself, this particular strain most definitely abides!

“Smoked just one bowl out of my pipe and i was gone. the high was almost instantaneous, and you could definitely tell it was a sativa dominant hybrid, but the indica was just the right amount. It kept me lit for pretty long, about 3-4 hours till i felt completely sober. definitely a great strain!”